We are engineers, designers, journalists and academics, but first and foremost believers that outstanding software and smart content can have a tangible, positive impact on the world around us.

Recyclist creates cloud-based solutions that make solid waste program management easy. The triple-bottom-line company designs software to empower citizens, government and business with the information they need to move our world toward a more sustainable future. Recyclist’s Software as a Service products — used by cities, counties and waste haulers — provide new visibility into waste stream data, innovative ways to track commercial outreach and compliance, and state-of-the-art digital recycling education for residents. Founded in 2015 in Truckee, California, the company is certified as both a SB (Small Business) and a DBE (Disadvantaged Business Enterprise). 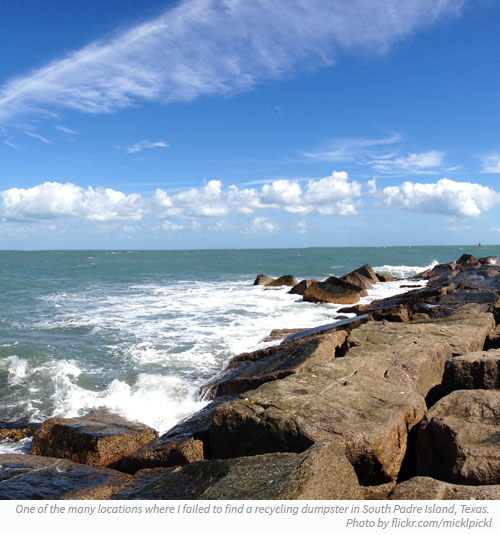 For a number of years, I enjoyed the itinerant life of the digital nomad, running my own virtual digital agency, living for a few months here, a few months there, making the most of my ability to experience new places while working along the way. One of my constant frustrations with all of this moving around was how hard it always was to figure out the recycling system in each city. I’d search the internet (and phone books and newspapers) high and low, almost always to no avail. I have a distinct memory of driving around South Padre Island, Texas, for ages looking for an alleged recycling dumpster I’d seen reference to. In the end I never found that dumpster and left an entire month’s worth of recyclables in a trash can.

The more frustrated I got, the more I kept asking myself, why is this so hard? I literally said out loud one day, “Why doesn’t someone just make this information easy to find?” And then the lightbulb went off: That someone would be me. Rather than complaining about the problem, I would do something about it.

My frustration around recycling just so happened to dovetail with my main professional frustration at the time. For ten years, I’d been creating online experiences and campaigns for some of best causes and institutions anywhere. I was successful but frustrated by the one-off nature of my agency’s projects. We produced great work, but the results were often akin to a blip on the radar. Huge effort would go in up front, but after we launched sites and handed them over to their owners, the sites were rarely kept up to date, and efforts to engage audiences quickly subsided. Meanwhile, we would have moved on to the next project.

With recycling, I saw an opportunity to put forth a long-term, sustained effort that ultimately would have long-term, sustained results. So instead of knocking on city doors looking to build one-off recycling websites, I decided to design and build a world-class, localizable recycling website, one far above and beyond what any one city could ever create on its own. I’d make it affordable by following the SaaS (Software as a Service) model of offering subscription access for reasonable fees, the effect being that multiple smaller budgets end up pooling together to give everyone access to a high-end product. As for the problem of keeping the content fresh, relevant and engaging, I realized we could solve that, too. No single program manager has the time to keep a recycling guide up-to-date and write blog posts and tweet and post to Facebook and send out newsletters with any kind of frequency — that’s nearly a full-time job in and of itself! But I knew we could do that job and do it well, regularly delivering great publish-ready content to all of our cities.

Fast-forward a few years, and after talking to every municipal recycling manager I could find about how the industry works and how better digital products could help with their jobs, Recyclist was born. And having discovered that public education and outreach is just one of many challenges facing recycling programs, my original vision expanded, so we are now building a full suite of products for municipal solid waste, recycling and sustainability managers. As for my original thought — “How hard could this be?” — of course I’ve been proven wrong. Waste management and recycling turns out to be a tangled world, full of contradictions and opposing forces, but also a wonderfully fascinating one, and one that I could not be happier to be working to change for the better.

Since the early days of Recyclist, I have learned so much, including the fact that the provisioning and disposal of food and goods is the single largest contributor to climate change. So my initial motivation — frustration — is now unexpectedly replaced by, of all things, optimism: I am honored to work alongside my intrepid team of amazing coworkers, motivated by the belief that we truly can make a substantive difference in this world.

Ready to get started?

Try our zero-commitment free trial to see if Recyclist is the right fit for your community.